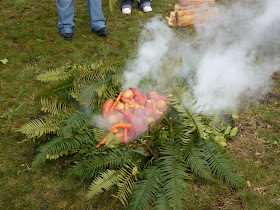 Earthen pit ovens have been used throughout the world for cooking feast foods and efficiently baking or steaming numerous foods that were dried and stored for later use.  Here on the coast the variety of foods that were prepared in earthen ovens ranged from small sea mammals to crabs and shellfish, to roots, and berries.  On Friday, I led a workshop for the Muckleshoot Tribal College on pit cooking.

I arrived early and with the help of Miguel—a particularly keen student—dug a pit that was about three feet in diameter and one foot deep with shallowly sloping walls.  We lined the pit with fist sized basalt rocks that I brought with me from Bellingham and kindled a hot fire on top of them.

The rest of the students arrived at 10:00 am and we divided into groups to collect Salal (Gaultheria shallon) branches and Sword Fern (Polystichum munitum) fronds, which are critical ingredients in pit cooking.

By 11:30, the rocks were nearly red hot and we scooped the unburned coals from the cooking pit and packed in our root vegetables.  Salal, which has amazingly fireproof leaves, was placed directly on the hot rocks and then covered with a mattress of sword ferns.  We placed carrots, onions, yams, and potatoes on top of the sword ferns, and then placed more sword ferns on top.  Then we poured water over the entire thing and quickly covered it with burlap and a couple inches of soil to seal in the steam.

Three and a half hours later we carefully uncovered the food and feasted on root veggies.  It is hard to beat the flavor combination of onions and yams that have been roasted underground with Salal!