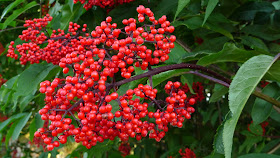 Every year when the Red Elderberries (Sambucus racemosa) ripen, I marvel at their beauty and quantity. Clusters of bright red fruit cascade from black stems and dark green foliage with branch bending abundance. Resembling a northern version of Toyon (Heteromeles arbutifolia), they seem better suited to ripening during Christmas-time than the heat of the summer, yet ripen they do by the first hot days of summer. It is hard to ignore a wild edible that grows so commonly as Red Elderberry, but most wild food books caution against eating the berries, despite traditional use by nearly all the Native American groups in the Pacific Northwest. On several occasions I have cooked and sampled the fruit, but until recently, my enthusiasm never lasted beyond a tentative taste of the cooked fruit. This year, however, I resolved to carry my experiments through to completion, and what follows is the first in a series of attempts to try and crack the palatability secretes of Red Elderberry. But first, a little background: 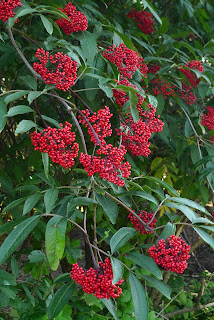 The genus name Sambucus comes from the Latin word sackbut or more properly, sabb’ka, which was the name of a little known ancient Aramaic stringed instrument supposedly made from elderberry wood (Dictionary.com 2013). In the middle ages, the word was also used to describe a wind instrument made from hollow elderberry stalks (Wikipedia 2013). The species epithet racemosa refers to the clustered flowers. Red Elderberry wood is used for flutes, funnels, and bows. The flowers and fruit are cooked and eaten or made into wine or syrup. While the roots, bark, and leaves are poisonous, they have medicinal value in small doses as emetics. The fruit have been used for centuries by numerous cultures as an herbal remedy for rheumatism, which may explain the common name “elderberry.”

Red Elderberry is a woody perennial forming bushes that are 12-20 feet tall. Young stems grow quickly, often 1-2 feet per year and have hairless to sparsely hairy green bark with white warts (lenticels) in the early season and darkens to tan-purple with grey-orange warts by fruiting time. The bark assumes a grey-brown color with the passing years and the warts grow larger until the bark loses all signs of smoothness in old age. Stems have a pithy core that makes the wood brittle when young but as the stem ages the outer wood increases thickness while the pith remains nearly the same size, making older branches considerably stronger than younger ones. Leaves emerge from large yellow-green to purple-red buds comprised of several pairs of large scales. Leaf scars are connect around the circumference of the twig. Leaves are pinnately compound with 5-7 lanceolate leaflets that have acuminate tips and serrated margins. Small white flowers are born in upright to drooping cone shaped clusters (panicles) in April and early May. The fruit changes from green to orange, ripening to a bright red by the end of June. Berries (drupes) are about 3/16” wide, spherical to egg-shaped, with 2-5 seed (nutlets) that are up to 1/8” long and 1/16” wide. Red Elderberries thrive in our moist mild climates throughout nearly all of the forested Pacific Northwest. Look for them in forests and forest margins from sea level to subalpine.

Red elderberries were traditionally harvested and processed for food by virtually all the Native American groups throughout the plant's range in the Pacific Northwest (Gunther 1945; Turner 1995) for several thousands of years (Losey et al. 2003). Berry laden branches were bent to the ground using hooked sticks and entire berry clusters were broken off and placed in baskets. When several baskets were full, the berries were stripped off of their stems and steamed or boiled in bentwood boxes, small canoes, or skunk cabbage lined pit ovens for several hours. The cooked berries were then spread out onto skunk cabbage leaves to dry above a hot fire or in the sun to make berry cakes (fruit leather), which was often stored until the winter before being consumed (Boas 1921; Gill 1984). Though abundant, elderberry fruit was considered second rate and was often mixed as a bulking agent with better tasting berries. During the historic period many Native Americans steamed Red Elderberries in steel pots, sweetened the fruit with sugar, and canned them in glass jars (Turner 1995). Red Elderberries are very seedy and the Kwakwaka’wakw, who generally believed it was rude to drink water during or directly after a feast, made an exception for Red Elderberries so that people could rinse the seeds out of their mouth (Boas 1921, pgs 564-566). Today few people eat Red Elderberries on account of their slightly bitter-pungent flavor.

This year, the first Red Elderberries began to fully ripen in the middle of July. Katrina and I plucked off entire berry clusters and quickly filled two grocery bags. We put our berries in the freezer for a couple days with the hope that the frozen stems would come off more easily (which is the case with Blue Elderberry). Unfortunately, the frozen Red Elderberry stems turned out to be brittle, so we allowed the berries to thaw before removing the stems[1]. Once all the stems were removed we boiled the fruit in a pot with 1 cup of water until the fruit began to juice, and then reduced the juice on low heat for several hours until the pan began to dry out. Then we ran the berries through a fruit mill to separate the seeds from the pulp. The abundance of seeds caused the fruit strainer to bind, so I loosened the screen to allow more space between the auger and the screen. Approximately ¼ of the seeds were crushed into meal and pushed through the screen but we did our best to separate the seed meal from the pulp. I wasn’t keen on eating the seed pulp as some studies suggest that the toxic compounds are concentrated in the seeds. Archaeological recovery of aggregations of elderberry seeds suggests that Native Americans were removing the seeds, but aside from spitting them out at the time of consumption (Boas 1921, pg. 566) a mechanism for removing the small seeds isn't known (Losey et al. 2003). After all the fruit was pulped we sweetened half with ½ cup of brown sugar, and left the other half unsweetened before spreading the pulp onto food dehydrator sheets and dehydrating them for 12 hours.


Our finished fruit leather is a dark purple with a flexible nature and oily texture. While the flavor isn’t great, it is much better than my previous, halfhearted experiments. Initially, the flavor is nice but the aftertaste has a difficult-to-describe pungency that I don’t like. We packaged and froze the fruit leather in the hope that the flavor will improve with storage, which isn’t an unreasonable suspicion given the pervasiveness of this practice among Native Americans.

My fruit leather will mellow in the freezer for several months, but I have already been plotting my next Red Elderberry experiment. Besides storage, a few ethnographies also mention soaking the cooked fruit in water, and I want to see if the water removes the disagreeable flavors. While working with the Puyallup and Nisqually, Marian Smith (1940, pg. 148) noted that after Red Elderberries were boiled they were, “put into loosely woven baskets which had been well lined with maple leaves. The basket was carefully covered with the same kind of leaves and submerged in a running stream. It took about a month for the berries to cure and be ready to eat. When finished they formed a thick paste ‘as yellow as butter.’ After the basket was opened it had to be kept in the water and the paste was used regularly until it was gone.” Contrary to other ethnographies that ascribe marginal flavor to Red Elderberry, Smith goes on to say “Elderberry paste was mixed with other dried berries to heighten their flavor.” Albert Reagan (1934, pg. 56) documented a similar method of storing (or treating?) Red Elderberries among the Hoh and Quileute. He wrote, “The cooked product is wrapped in skunk-cabbage leaves and buried in the muck in some swampy place, to be dug up when needed.” Edward Curtis (1913) also recorded this practice among the Quinault who "steam-cook them, surrounded in the pit by skunk-cabbage leaves, pour them into hemlock-bark boxes, and then submerge the receptacles in the water of a shallow creek, where they were preserved indefinitely." While cool temperatures and low oxidation rates in submerged environments provide the most likely explanation for this practice, it is conceivable that water storage was a desirable means of leaching out bad tasting constituents in the cooked berries, or slightly fermenting the fruit.

Water storage of Red Elderberries was also practiced in other parts of the Pacific Northwest. According to elders interviewed by Nancy Turner and Randy Bouchard (1976, pg. 81) the Squamish also stored Red Elderberries in water. The berries were cooked until they formed a “molasses-like mass” and placed in a special red cedar basket called tl’pat which was anchored underwater. When the berries were needed, they were pulled up, the required amount removed, and the remainder re-submerged. August Jack concisely describes the process in an interview with Major Mathews (1955, pg. 10): “Elderberry put in sack, you know Indian sack; put sack in creek so clean water run over them and keep them fresh. By and bye get sack out of creek, take some berry out, put sack back again (also quoted in Turner and Bouchard 1976).” The Skagit similarly employed this method, as described by McCormick Collins (1974, pg. 57), “the women might preserve [Red Elderberries] by wrapping them in maple leaves and putting them in a hole dug in wet sand.”  The Kwakwaka’wakw produced also an elderberry paste by soaking the cooked elderberries, but rather than storing the berries in water for several weeks, dried berries were only soaked in water for the duration of four winter ceremonial songs, at which point they were mixed into a paste by hand, and eaten (Boas 1921).

For my next Red Elderberry experiment, I will emulate the more recent traditional method of preparing Elderberries and can the cooked berries.

Warning: The roots, wood, bark, leaves, and to a lesser extent, the raw flowers and fruit of Red Elder berry contain cyanogenic glycosides and should not be eaten (Turner and Szczawinski 1991).


Curtis, Edward 1913. The North American Indian, Vol 9: The Salishan Tribes of the Coast.

Gunther, Erna 1945. Ethnobotany of Western Washington, the Knowledge and Use of Indigenous Plants by Native Americans. University of Washington Press, Seattle WA.

Reagan, Albert 1934. Plants used by the Hoh and Quileute Indians. Transactions of the Kansas Academy of Science, Vol 37.

[1] According to Edward Curtis (1915, pg. 40) the Kwakwaka’wakw did not remove the stems before cooking Red Elderberries. Rather, they cooked the fruit until it was soft enough to easily separate the stems.
T. Abe Lloyd at 11:50 PM
Share
‹
›
Home
View web version